Today was the longest so far in terms of time on my feet, but it felt like the shortest. The reason for this apparent contradiction: I was joined for the first 28 miles by Ben ‘365MarathonMan’ Rogers. 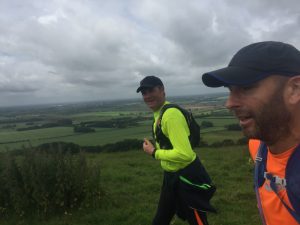 Through the power of t’internet, Ben had made contact a few days ago, saying that my route past through his area and that he was keen to come out an run a few miles with me. After a couple of messages back and forth, I discovered that he’s in the process of running a marathon a day for a year; starting with the London Marathon this year and finishing with the 2017 edition. ‘Wow’ I thought, ‘makes my little saunter look pretty insignificant’.

We met, as agreed, at 8am sharp this morning and set out up the hill to join the NDW. The plan was that we’d run together to Folkestone, from where Ben would jump on a train back to his car.

I was intrigued to find out more about Ben and his challenge: his motivation, his training, his diet etc etc etc. So the first few miles flew by as we chatted about our respective challenges and experiences. I think the thing I was most impressed with was (unlike most others out there doing crazy challenges over long periods of time) Ben is doing it while working full time and managing a hectic life with a young family. Usually having to get up at stupid o’clock to run. And I mean STUPID o’clock to the likes of you and me.

Despite a few downpours and mud underfoot the miles slipped by as the conversation flowed, and in what seemed like no time we were in the village of Wye – 13 miles in.

A quick pit stop to buy water and we were ascending the steep climb up onto the escarpment of the Wye Downs. Once on the top the running was easier for a while but it would have been wrong not to pause a time or two to admire the views across the flatlands below us.

I’d planned to stop and get lunch in the next village, Stowting, about halfway. But on arrival we discovered that not only are there no shops in Stowting, the only pub isn’t open on a Tuesday. So after a brief pause, we pressed on to Etchinghill, 3 miles further on. On the map it looked like a bigger village so was bound to have a shop I thought – WRONG! It seemed I was not destined to eat today. ‘How do people feed themselves around here’ I thought, just as a Tesco delivery van went ironically past. If only I’d have known, I could have tested them out to see if they’d deliver to stile number 8724 on the NDW! 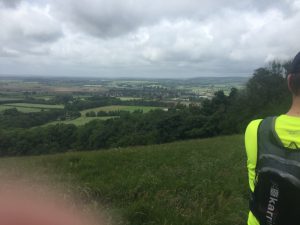 5 miles further on after navigating a very muddy path along a former railway cutting and a near vertical climb, we were back on the escarpment, looking down over the huge Eurotunnel terminal at Folkestone and beyond that to the sea. Living in Derbyshire, which is about as far as you can get from the sea in the UK, means that it always seems to feel a bit special to arrive at the coast – well it does for me anyway. And having run all the way there, it felt more special than normal today.

It had been a pleasure running with and getting to know Ben, but it was time for us to go our separate ways. We said our farewells and I pressed on towards the white cliffs of Dover, while he dropped down try hill to catch his train. I hope to stay in touch with him though and will definitely be watching his progress as his year of marathons continues.